Consumers are drowning in the mess Obama has made

Washington lawmakers are again debating what to do with a healthcare bill that never should have been passed. The current law whether you call it the Affordable Care Act, the ACA or Obamacare took an irrational path towards achieving its objective. In reality, it is no more than a massive transfer of wealth masked as “healthcare legislation.” When it comes to healthcare people face issues of both care and cost, what I see as the crux of the issue is who will be paying these bills. We must look at how we can cut healthcare cost so we get more and better coverage for the money spent. Extending Medicare to give the most “basic coverage” to everyone would require some rationing of service to contain cost, but this is already being done. Expanding Medicare would allow us to discontinue Medicaid while meeting our goal of basic healthcare for all citizens.

Healthcare is ridiculously expensive because many people have convinced themselves of three things: The answers for good health outcomes rest with pills and procedures rather than good diet and exercise. Death at late stages of life is some strange, recent development in human history which justifies and necessitates extreme, exorbitant payouts to delay it for every possible last second.  And last but not least, thinking that mixing all the myriad of “health care” transactions that result from the just mentioned concepts with health insurance as originally conceived to protect a person from unforeseeable, catastrophic events like an accident is a good idea. Remember, just because we can does not mean we should, if we do not prioritize and limit healthcare it grows like a tape worm ever ready and always wanting to grow larger.

Accounting for 16% of the economy, healthcare has become the Achilles heel of American competitiveness making the cost of American produced goods less competitive and adding to our trade deficit. While the money spent on healthcare wrongly feeds the GDP giving the illusion of economic growth it is clearly the wrong kind of growth and actually a tax on society, Americans spend more on healthcare than people in other developed countries, but with very poor results. Our healthcare problems are not for lack of spending,  Our system allows insurance companies to stick their nose into every interaction you have with a health care provider, they get to take a large cut as well. It has become virtually impossible to find a modestly-priced traditional insurance plan that protects a person from unforeseeable catastrophic accidents while letting them own responsibility for the accumulation of their lifestyle choices over time, thus differentiating the healthy 70-something marathon runners from a fat slob suffering from self-induced diabetes. 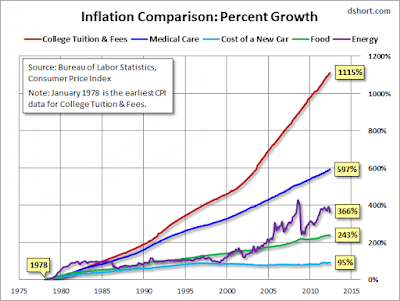 Government has caused College and Healthcare to Soar

We all know what happens to costs when free government money flows into a system, hello college tuition! Surely, there is a legitimate and rational place for government in ensuring access to basic levels of care, but we’ve lost our bearings about what “basic levels of care” should mean. Indeed, healthcare and hospitals have become a quasi-government entity. After the Supreme Court  decided that Obamacare is here to stay, I heard one supporter say “I think it rather tragic that a five/four Supreme Court decision could have overturned the wishes of  Congress.” Another joked, “I guess we could just let people die in the streets but then the conservatives would probably complain about the cost of collecting the corpses.” This is the kind of noise that makes it difficult to stay focused on the important issues.

It is not difficult to make a case that Obamacare is a boondoggle to increase the profits of private companies and their owners. The law has proven far more expensive and harder to implement than first thought driving premiums skyward for many Americans. A better alternative would have been to adopt a single-payer system covering “basic healthcare” which is something people already get when they collapse in the street. Many proponents of such a plan argue a single payer program would be more rational, less expensive and achieve many of the goals of the healthcare bill by cutting cost through eliminating wasteful duplication, bureaucracies, and paperwork. A single payer system wouldn’t eliminate insurance or pharmaceutical companies, they would continue to sell extensive types of “optional” plans that would extend coverage beyond the basic care government would provide.

Deciding what is better or workable is the job of the legislature and has become a political “hot potato” with no easy answers. We all know that there is no escaping the grim reaper, and little to no way to collect medical bills from those who die with no assets to pay for burial, cremation, etc. We also know that bankruptcy laws exist which allow people with medical bills to cast off the responsibility of paying their debts and to walk away leaving the cost to be spread out across the rest of society. We cannot effectively make or “mandate” people buy burial insurance, eat broccoli, work out, and stop eating junk even though if you are out of shape you increase your chances of getting a major disease and forcing costs on the system. When all is said and done the crux of the issue is how can America cut healthcare cost and get better care for the money spent. It should be noted that it doesn’t help that hospitals and caregivers are allowed to charge different or discount prices for various insurers and take other patients to the cleaners, it is not only unfair it is downright corrupt.

Here are the Seven RINOs who Voted Against Repealing Obamacare